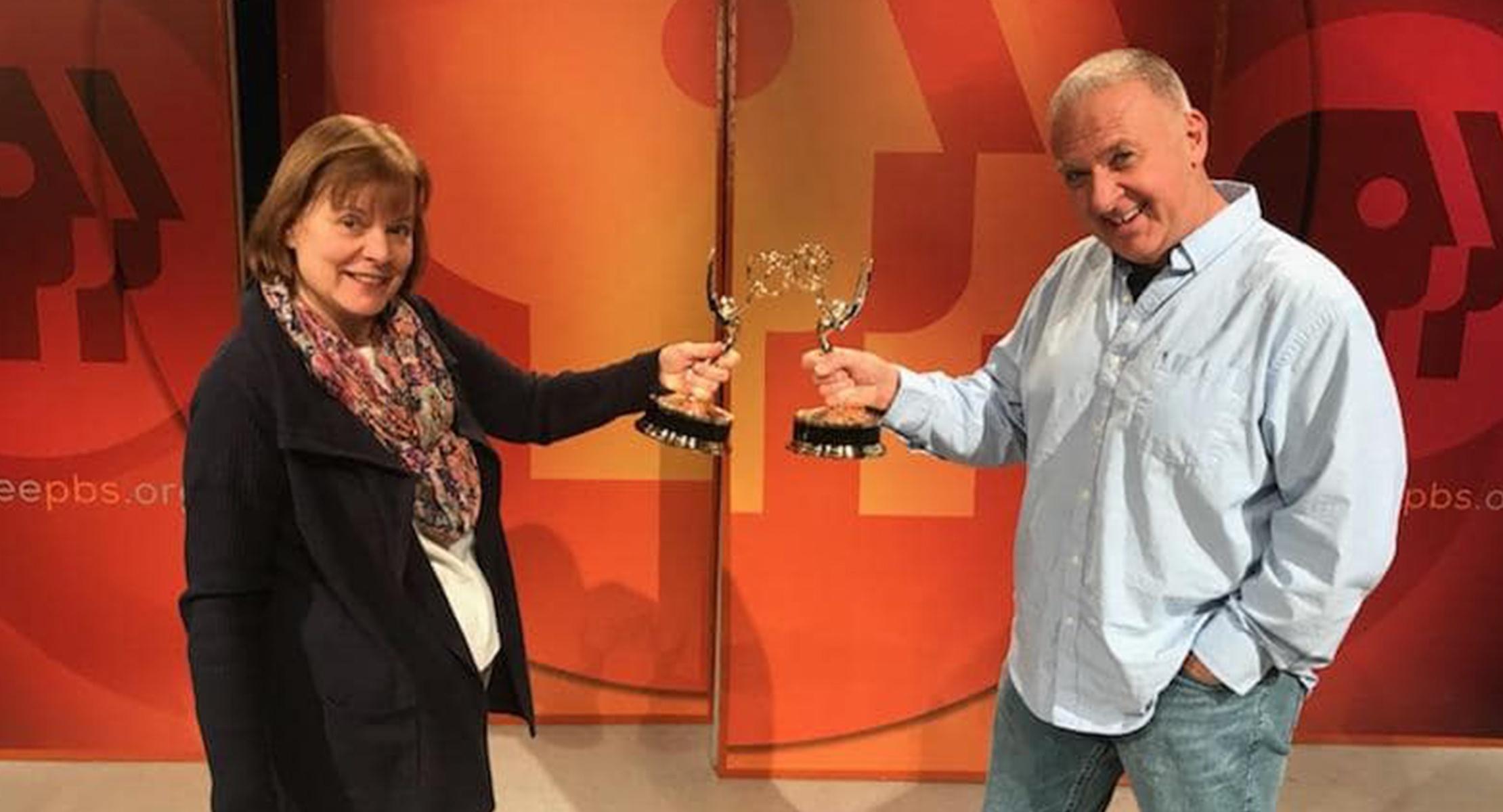 Milwaukee PBS was recognized for its work in telling Milwaukee’s stories at this year’s Emmy Awards Gala in Chicago. 10thirtysix, Milwaukee PBS’ signature news program, was honored with two regional Emmys, and John McGivern, host of Around the Corner with John McGivern, won for Outstanding Achievement-Program Host.

“We are honored that the Academy has recognized the 10thirtysix team and John McGivern, for their commitment to tell the stories that reflect the diverse communities we serve in southeastern Wisconsin,” said Bohdan Zachary, General Manager of Milwaukee PBS. “As the region’s public television station, we are dedicated to producing local content that encourages viewers to explore new ideas and to consider issues in a different way.”

Milwaukee PBS’ monthly news magazine, 10thirtysix, offers southeastern Wisconsin a unique platform for the topical and relevant issues that affect the community. It takes a deep dive into crucial issues by telling stories in a thoughtful and impactful way. Veteran newswoman Portia Young hosts 10thirtysix. It airs on the third Thursday of every month at 7:30 p.m. on Milwaukee PBS Channel 10.1.

10thirtysix received an award for Outstanding Achievement Outstanding Achievement for Children/Youth/Teen Programming for its special, “Kids in Crisis: You’re Not Alone,” which was produced in partnership with the Milwaukee Journal Sentinel / USA TODAY NETWORK–Wisconsin.In the state of Wisconsin, the teen suicide rate has nearly doubled in the last decade, so the 10thirtysix production team felt it was vital to address this issue. “Kids in Crisis: You’re Not Alone” tells the stories of four youth and their struggles with mental health. By bringing their stories to light, the documentary pulled the conversation and the issue of mental illness among youth into the forefront. Since its premiere in May 2019, “Kids in Crisis: You’re Not Alone” has aired nationally on PBS stations across the country, it has been screened in middle and high schools nationwide, received several local and national awards, and contributed to proposed legislation in the state legislature.

“There's nothing better than being recognized for helping to make a difference,” said Maryann Lazarski, Producer of 10thirtysix. “The Emmy should really go to Barrett, Alex, TJ and Reyna. Their open and heartfelt stories about their mental health journeys have encouraged others to speak up and seek help, knowing they're not alone. It was a privilege to work with these four amazing young people to produce this critically important and impactful documentary. Our entire production team approached this project with the highest levels of sensitivity and creativity.”

10thirtysix also received an award for Outstanding Achievement in Public/Current/Community Affairs Programming for its segment, “A Hope for Tomorrow.” This episode aired in January 2019 and told a Congolese refugee’s story of challenges and triumphs, from his time in a Tanzanian refugee camp, his resettlement in Milwaukee, and his hopes for the future. The community response from this moving segment inspired the 10thirtysix team to produce a full-length documentary, presenting a more in-depth look at the plight of refugees in southeastern Wisconsin, and telling this one man’s inspiring story more profoundly. This special premieres on Thursday, November 21 at 7:30 p.m. on Milwaukee PBS Channel 10.1.

Said Lazarski, “I'm grateful that 10thirtysix has been recognized at this high level for the caliber of in-depth, meaningful stories we bring to our viewers each month. This particular episode showcased Congolese refugees who lived through hell in the war-torn DRC and resettled in Milwaukee with hope in their hearts and a desire to make a positive impact on our city. I think we were able to open people's eyes a bit more to the horror these refugees have experienced and why living in our city and becoming an American citizen means the world to them.”

John McGivern received the Emmy for Outstanding Crafts Achievement for On-Camera Talent -– Program Host/Moderator for the Milwaukee PBS’ weekly series, Around the Corner with John McGivern. McGivern is a beloved Milwaukee personality and already a multiple regional Emmy award winner. For the last eight years, McGivern has delighted Milwaukee PBS viewers by exploring Wisconsin’s unique communities, and presenting the local flavor of each community, the history of these communities, and the personal stories of the residents. The 9th season of Around the Corner with John McGivernpremieres on Thursday, February 6 at 7:00 p.m. on Milwaukee PBS Channel 10.1.

“I'm thrilled to be honored and acknowledged with this Emmy Award,” said John McGivern. “We love to make this show because we believe what we're making is a love letter to this state we all call home. I'm proud of all of the accomplished, professional Milwaukee PBS television-makers I call my colleagues and friends. We're hoping for another nine seasons.”