Not all issues are covered on this page.

Click here to submit a ticket with Viewer Services.

Need help with your viewing issues?

The new channel configuration was needed because the FCC held a nationwide spectrum auction of television station bandwidths, to expand wireless services in order to meet the increasing needs for faster and higher capacity mobile broadband services. Milwaukee PBS, a licensee of Milwaukee Area Technical College, participated in the broadcast spectrum auction.

If you watch channel 10 and 36 using an over-the-air antenna, you needed to make some adjustments to your television and/or antenna.

If you have already scanned your television, but are having reception issues, here are some trouble-shooting techniques:

If you have NOT already scanned your television, please follow the instructions below:

In the Milwaukee Market, you will need a VHF/UHF antenna in order to receive all of the PBS lineup. 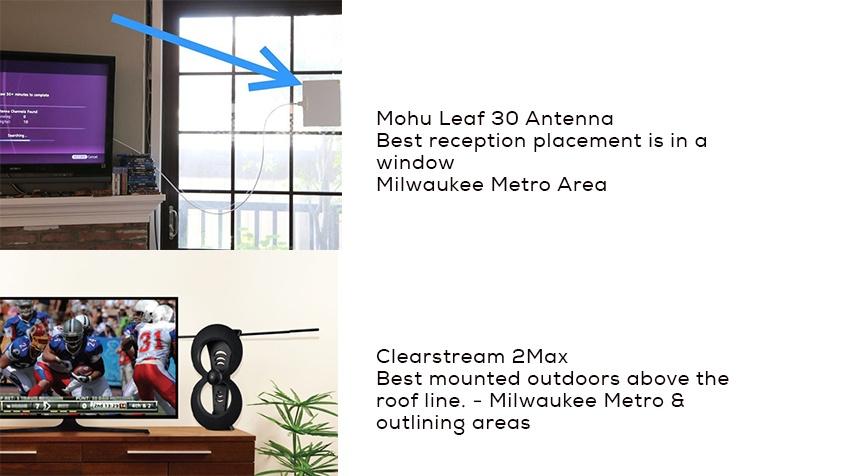 If you are in the Milwaukee metro area an indoor antenna is likely all you will need to receive our signal. Place the antenna in a window facing the television towers located in Estabrook Park on Milwaukee’s northeast side.

If you live farther away from Milwaukee, you may need to consider an outdoor antenna that is installed above your roof line.

It’s important to note that there is no one size fits all antenna.

The best antenna option is to suggest a professionally installed VHF/UHF antenna system that feeds all TVs in the house.

For more information about antennas please visit our FAQ page

First, remember if you watch television over cable or satellite you don’t have to scan.

If you watch television over the air using an antenna you WILL need to SCAN. Typically you use your remote to perform the scan. You can follow the steps in your owner’s manual or look online. Since the process is a little different for each brand of TV we have provided some of the top television manufacturers’ information on how to perform a scan. The process will vary depending on the model you have. The information below is intended to get you headed in the right direction. You can refine your research from there. If your brand of television is not listed below you can also check the FCC Consumer Toolkit.

What is this activity called?
Channel realignment

Why is it happening?
As a result of the FCC spectrum auction, the MATC board sold our analog bandwidth. The FCC wanted more bandwidth for cellular companies and they came up with the idea of a reverse spectrum auction that would accomplish that goal.

What do we need to do to receive programming?
Cable & Satellite --- Nothing, the provider will take care of it. If you watch with an over-the-air antenna then you will need to scan, auto-tune or run the channel set-up. Some systems will do this automatically.

What do you mean, Scan?
Your television remote is required to scan - there should be a button titled "Settings", "Scan", "Setup", "Menu", or something of that style. Sadly, the television industry never settled on a standard term, but suffice it to say, you need to open a menu on your television in order to have your stations scanned. Once you find that menu, you will need to choose the option that will start a process where the television 'scans' the airwaves and stores the channel for each signal it is able to receive. Once started the television will seem to run through each channel (without you needing to use the channel up/down arrows on your remote) and will created and store an updated list. Your television screen will not show channel schedules or any other show while it is performing the scan. You will not be able to change or select a channel while the scan is being performed. If this is happening, then you are on the right track. Once complete the television will default to the first channel that it found and will return full control of the television. Your scan will be complete. Try going to the channels listed above - if they appear - you are set.

Do we need a different antenna?
If you receive our channels now you likely won't have to get a new antenna. If you use an antenna in Milwaukee you should just be able to scan and receive the realigned channels. If you are in an outlying area and watching with an antenna, you should scan your television. If you don't see the realigned channels then you may need a stronger antenna. We suggest a Mohu Leaf 30 (Metro Milwaukee area only) or ClearStream 2Max.